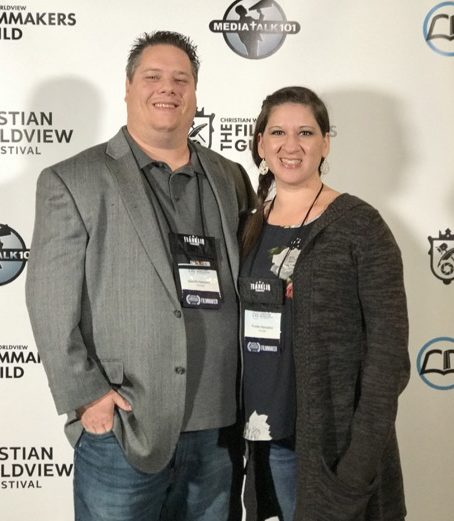 Garritt is a movie industry veteran with credits on some of the biggest movies of the last decade, including Interstellar, Furious 7, TRON: Legacy, GI Joe: The Rise of Cobra, The Twilight Saga: New Moon, and many more. He is passionate about using his talents to build up the family and glorify God. You can view Garritt’s credits on IMDB.

Yvette is a homeschool mom through and through, but it wasn’t supposed to be this way. Like so many other homeschoolers, Yvette and her husband, Garritt, said they would NEVER homeschool their kids, but God had other plans. As a mom who is concerned for the future of this generation and the future of our country, Yvette has a deep passion to see a culture shift by encouraging people through the truth of God’s Word. Her greatest joy in life is being a wife and mom!

Yvette’s greatest enjoyment is being a full-time wife and mom. She has been homeschooling since 2011. Her ninja-like organizational skills and outgoing personality make her the perfect producer and host.

Connie is a respected speaker and author for NavPress who has served the homeschooling community for 27 years, as well as homeschooled her five children who are all graduates of the University of Central Florida. She has served as a director and board member for a large state homeschool organization, worked in the political arena as a senior strategist for a successful U.S. Congressional campaign, and has been a Speaker Relations and Events Manager for Apologia Educational Ministries.

View the film credits to see all cast and crew.

SPEAKERS
The Schoolhouse Rocked production team and cast are available to speak at your homeschool convention, church, school, or corporate event. Request a speaker.