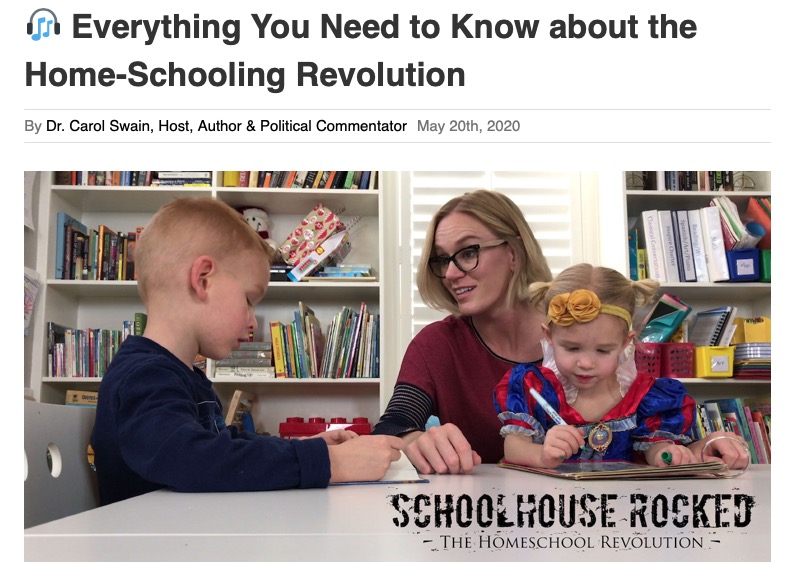 “What knowledge and skills does it take to become a successful home-schooling parent? In this episode, I interview Yvette Hampton, a home-schooling parent and producer of the forthcoming film: School House Rocked: The Home-Schooling Revolution. Yvette updates us on the film and legal and educational resources available to parents contemplating their next steps.”

“Yvette and Garritt Hampton are the producers of a feature-length documentary on home schooling in America. The film, Schoolhouse Rocked: The Homeschool Revolution, is in post-production. Yvette and I discuss the more than two-million families who now home school and the challenges they face. Join us for an informative session with a true believer who has interviewed education experts, curriculum developers, parents, and families across the nation.”

Dr. Carol Swain  has been a blessing to the Hampton family and to the Schoolhouse Rocked team. She can be seen in the official trailer for the movie and will be an important part of the film. She is the host of the ‘Be The People’ Podcast on America Out Loud, which brings Insightful interviews with movers and shakers. Be the People is about We the People joining forces to reclaim and reshape the best of our nation’s time treasured traditions.

Watch and listen to more from Dr. Carol Swain: